skip to main | skip to sidebar

Please visit this link to hear an announcement about the podcast.

Posted by Christopher Orapello at 7:38 PM No comments:

In the latest episode of The Infinite and the Beyond, we speak with Australian author and teacher, Lee Morgan about her new book A Deed Without A Name: Unearthing the Legacy of Traditional Witchcraft. Lee identifies as a pagan animist – witch and runs a blog titled My Craft and Sullen Art where she identifies herself as a Traditional Witch, non traditional dichotomy-smasher, line-blurrer, bone-singer, folk-healer, head-bender, and sometimes poet.

"The field of witchcraft studies is continually over-turning new information and research about traditional witchcraft practices and their meanings. A Deed Without a Name seeks to weave together some of this cutting-edge research with insider information and practical know-how. Utilising her own decades of experience in witchcraft and core-shamanism Lee Morgan pulls together information from trial records, folklore and modern testimonials to deepen our understanding of the ecstatic and visionary substrata of Traditional Witchcraft. Those who identify themselves as 'Traditional' tend to read a lot of scholarly texts on the subject and yet still there remains a vast gulf between this information and knowledgeably applying it in practice; this book aims to close that gap." - A Deed Without A Name (back cover)

We hear some awesome music by Swallows from their latest album, “Witching and Divining.” Swallows is an Americana/rock band from Minneapolis, Minnesota who has recently released their second full-length album, the roots-oriented Witching & Divining. Since its release, Witching & Divining has received strong media support in the Twin Cities and was in rotation on over 160 college and public radio stations throughout the U.S. and Canada, including several weeks of charting in the CMJ and Earshot! top 30 on 15 stations.

In A Corner in the Occult, we learn about Scottish witch Isobel Gowdie who was tried for witchcraft back in the 17th century. One of most of the witchcraft confessions obtained in trials from the past centuries, Isobel Gowdie's, a flaming red-haired woman from Auldearn, Scotland, is said to be the most elaborate and compelling and offers a unique look at what Scottish Witchcraft may have been like.

And in the Essence of Magick, we consider the values and issues surrounding authenticity. The desire for truth and the concern for authenticity in one's spiritual and religious practice, has a tendency to even filter into one's personal magickal practice. Which begs the question, what does it mean for one's magick to be considered as authentic? Does this issue refer to history and the accuracy of a practice or does it refer to the level of sincerity behind the act? All this and more in this episode of The Infinite and the Beyond. Enjoy!
Posted by Christopher Orapello at 1:00 PM No comments:

Behutet Magazine is the magazine that Jason Miller is a regular contributor to.

Behutet, a Magazine of Modern Thelemic Magick and Culture, is a widely circulated 'zine of Thelesis Lodge O.T.O.

"Behutet" is an epithet for the Egyptian winged sun-disk.

The magazine focuses on magickal techniques, occult history and Thelemic culture in a modern setting. We strive to make the magazine as original as possible and as such we tend to avoid reprints of commonly available material and commentaries on same. As a practical technical journal we also tend to steer clear of poetry, with the noted exception of poetic Invocations and/or channeled writings.

If you are an artist, original artwork is always a welcomed addition to the magazine! Please speak with editors to discuss deadlines and guidelines.

Email us at relations@behutetmagazine.com
Posted by Christopher Orapello at 5:25 PM No comments: 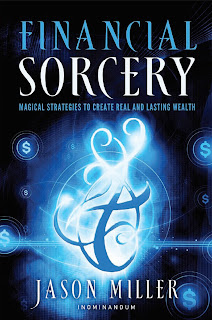 In the latest episode of The Infinite and the Beyond, we speak with author, teacher, and sorcerer Jason Miller about his work and his new book Financial Sorcery,  Magical Strategies To Create Real and Lasting Wealth.  In a Corner in the Occult we learn about the often over looked Illustrator of the Rider-Waite-Smith Tarot, Pamela Colman Smith.  We see who won a copy of Leslie Fish’s album “Avalon is Risen” that was featured back in Episode #029.  In the Essence of Magick, we learn about “symbols” and what role they play in the work of the magickal practitioner.  And as a treat we get to hear some new music by Damh the Bard from his  recent album “Antlered Crown and Standing Stone.” – Blessed Be!

In this episode we speak with Australian visionary songstress Wendy Rule and have a very enjoyable time with her as we discuss her work; her online course Living a Life of Magick; hanging out with the fae; her future album and her current US tour. All while being completely captivated by her music which plays throughout the episode. In A Corner in the Occult, we learn about the controversial, “King of the Witches,” Alex Sanders and in the spirit of creativity we contemplate the ideas surrounding the Awen in The Essence of Magick. All this and more in this haunting and inspiring episode with the lovely Wendy Rule!

Posted by Christopher Orapello at 6:50 PM No comments:

Official Description: Do you want to be a nicer person? Are you looking for inspiration to do good things? Well keep looking. But if you're into opening up terrifying vistas of reality then the Esoteric Order of the Old Ones and Cthulhu Cultists want to help. Contact us today to find out how.
Posted by Christopher Orapello at 6:45 AM No comments:

Email ThisBlogThis!Share to TwitterShare to FacebookShare to Pinterest
Labels: Episode #029

The journal for today's Witch!

A Witch's Journey - 2013 is the perfect writing companion to your regular Book of Shadows. Beyond simply being a date book, A Witch's Journey offers the practitioner a complete writing experience by offering a page for every day of the year. Beginning with Aries on March 21, 2013 and ending with Pisces on March 20, 2014. A Witch's Journey will help you chart your magickal progress through the twelve signs of the zodiac, while monitoring the lunar phases and signs of each day and the perfect way to journal your daily work as a witch.
Now available. Purchase your copy today! 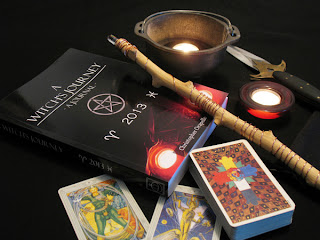 Read more »
Posted by Christopher Orapello at 10:35 AM No comments:

Welcome to the podcast!

Hail & Welcome to the Official blog for The Infinite and the Beyond podcast, an esoteric podcast for the introspective pagan mind!

Listen to the show!